And We Danced DJ Entertainment played a wide range of music for the HUB-Robeson audience as well as many drag queen favorites while Drag Queen Story Time, Drag Queen Bingo and Drag Queen Performances took place in the Freeman and Noontime Lounges. Various organizations representing the LGBTQA community took over the first floor of the HUB-Robeson Center providing information for students.

Carlos Alfonso Díaz Hernández, professionally known as Cynthia Lee Fontaine, is a Puerto Rican drag queen performer and reality television personality. Cynthia Lee Fontaine was the third queen eliminated during season 8, but fans voted the queen as Miss Congeniality. Fontaine came back as the 14th queen for season 9 but was sent home losing to Peppermint during a lip sync competition.

And We Danced DJ Entertainment had a fantastic day providing music for all during the event at the HUB-Robeson center! Take a look at the video and pictures below to see some of the awesome drag queens and dancers enjoying the HUB takeover! RuPaul would be so proud of them!

All video and photos in this blog post by And We Danced DJ Entertainment.  Copyright © 2019.  All rights reserved.

And We Danced DJ Entertainment had the pleasure of providing music for the Penn State Army ROTC Dining Out 2019. Current cadets escorted their parents, family and significant others to this year’s event at the Bryce Jordan Center. The Bryce Jordan Center staff had the main floor splashed with blue uplighting highlighting the dining and dance areas. Bryce Jordan Center Catering provided the scrumptious dinner for the event. After the retiring of the colors and final remarks, guests had the opportunity to take some fun photos with Lotsa Laffs Photo Booths. Guests were also encouraged to have fun dancing to familiar tunes.

Military training has been a tradition since the inception of Penn State. In the early years, training was provided by civilians familiar with military protocol. Later, a full-time professor of Military Science was added to the roster at Penn State. Penn State provided military training for many men that fought in World War I and World War II. In 1916, an ROTC unit was established at Penn State. Throughout the years, training has changed from the initial drills to instruction in all branches of the military to general military science training. Today, Penn State has one of the top ROTC programs in the country. The Nittany Lion Battalion today includes four companies. Three are known on the main campus, and the fourth is part of the Altoona campus.

Thank you Penn State Army ROTC for choosing And We Danced DJ Entertainment to be a part of your 2019 Dining Out!

The Graduate and Professional Student Association (GPSA) is a student run Penn State University organization promoting graduate and professional students interests. The GPSA is the oldest existing student governing organization at Penn State. The organization is comprised of the Executive, the Assembly and the Judiciary. The member positions in the Executive and Assembly are changed each April with an election and graduate and professional student vote. The Judiciary body is comprised of three members appointed by the President and approved by the Assembly.

And We Danced DJ Entertainment can’t wait to party with the Graduate & Professional Student Association at their next Winter Gala!

And We Danced DJ Entertainment had the opportunity to provide music for the recent 2018 Fit For Fritz fundraiser, where a walk-a-thon, dodgeball tournament, and fun games were held at the Penn State multi-sport facility. The fundraising event is in honor of Fritz Spence, assistant track and field coach at Penn State, who was diagnosed twice with acute myelogenous leukemia (AML) but has twice battled the disease and is today in remission. Each year, the Penn State Track & Field athletes raise money in honor of Fritz Spence and donate the proceeds to Hope Lodge.

Hope Lodge is a facility funded by the American Cancer Society for cancer patients and their families throughout the United States. It provides a cost-free-living environment for cancer patients and their families in their time of need. The money raised each year during the Fit For Fritz event is donated to the Hope Lodge located in Hershey, Pennsylvania. This is the facility Fritz and his family spent a great deal of time at while receiving his treatments.

The event started with the singing of the national anthem by Elyse Skerpon, a junior on Penn State’s Track and Field roster. Fritz then began the walk-a-thon with the firing of the gun. The gun didn’t want to fire, but Fritz finally got it working! The participants did eight laps around Penn State’s indoor track field located in the multi-sport facility. Once the eight laps were completed, groups began to play cornhole, shoot some baskets, sign up for the dodgeball tournament, and play some fun games. The dodgeball tournament was a big hit with participants. Many groups signed up to play in the event. The tournament didn’t conclude until the final 15 minutes of the event.  Coach Spence even made a guest appearance behind the DJ booth!

Everyone present at the event had the opportunity to register and be a bone marrow match for someone in need. There were also theme baskets. A person could purchase a ticket and place the ticket in the ticket carrier located in front of the theme basket they personally wanted to win. Winners were announced at the end of the event.

Thank you Fritz and Penn State’s Track & Field athletes for allowing And We Danced DJ Entertainment to be a part of your fundraising activity.

And We Danced DJ Entertainment is looking forward to next year’s Fit For Fritz fundraising event! 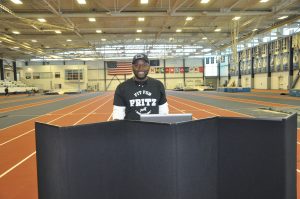 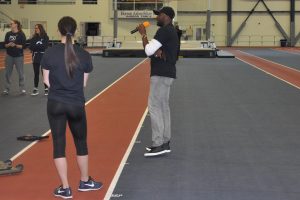 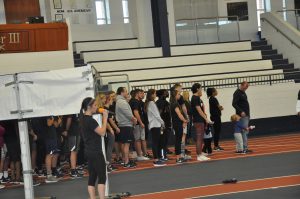 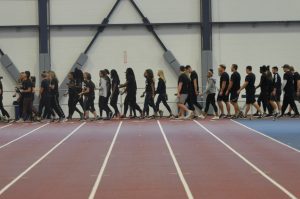 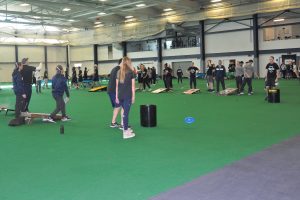 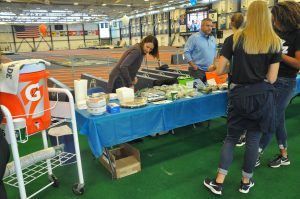 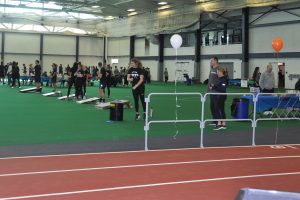 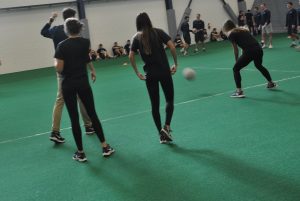 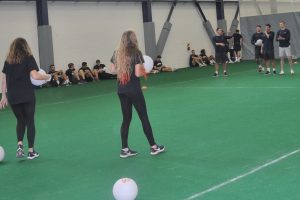 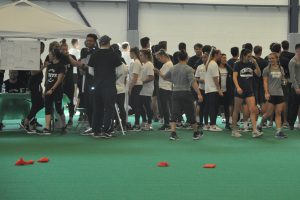 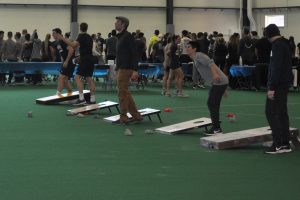 All photos in this blog post by And We Danced DJ Entertainment.  Copyright © 2018.  All rights reserved.

And We Danced DJ Entertainment had an amazing time at the State College Days Inn on April 13th with Penn State’s Association of Women in Computing (AWC), the American Institute of Chemical Engineers (AIChE), the American Society of Civil Engineers (ASCE) and the Society of Women Engineers (SWE), as they held their 2018 Semi-Formal with the theme, Under the Sea!  The professional groups decorated the room with inflatable sea creatures and mermaids. Balloon decorations were placed at each doorway symbolizing bubbles under the water. A bubble machine was churning a never ending supply of bubbles as the guests danced. And We Danced projected a stunning light show onto the dance floor.

And We Danced DJ Entertainment provided upbeat dinner music to enhance the dinner hour. A little after eight o’clock, the students were ready to have fun. Lights were turned down, and the students began getting up and moving to the music. While some guests left the dance floor to get some fun pictures with their friends and significant others at the photo booth provided by Lotsa Laffs Photo Booths, many began to sway and get down to the throbbing dance music. By the third song, the dance floor was packed with guests partying. Lights were flashing while bubbles were brewing as guests performed the Cupid Shuffle and Cha Cha Slide. The guests were having such a great time!

Penn State University has various professional engineering societies geared towards various engineering backgrounds. Each society meets on Penn State’s campus and can be found online with meeting times and locations. If you have interest in any of these groups, please look them up online!

When And We Danced DJ Entertainment announced that the semi-formal would be ending, the guests thanked us and said good-bye.

And We Danced DJ Entertainment can’t wait to party with these fine folks in 2019! 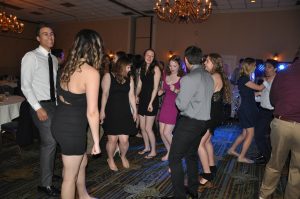 I’m Glad That I Came Tonight! 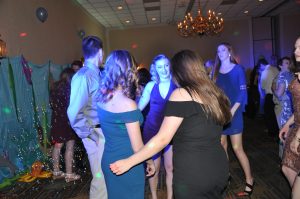 These Bubbles Are Really Cool! 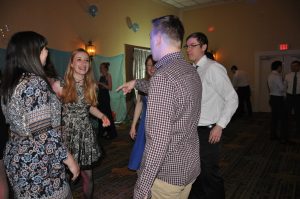 Alright, What Should We Do Next?!! 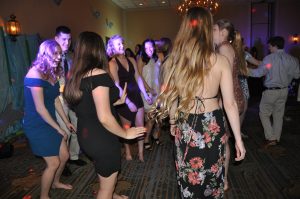 What Song Should We Ask The DJ To Play Next? 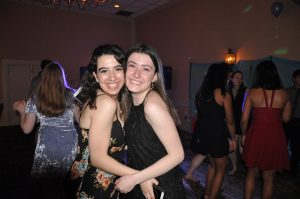 A Great Night For Friends! 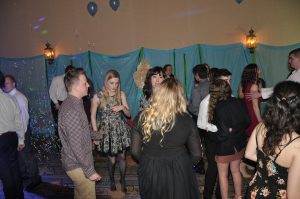 It Really Looks Like We Are All Under The Sea! 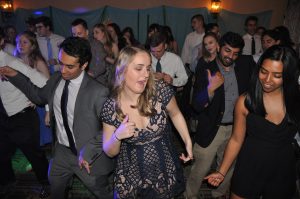 Look At Us All Dancing Together! 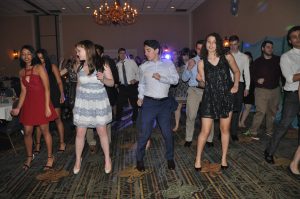 We Really Love The Cupid Shuffle!

All photos in this blog post by And We Danced DJ Entertainment. Copyright © 2018. All rights reserved.